January 9th, 1937 Marion and Crittenden County was hit by an ice storm.  This ice storm preceded the historic 1937 flood. 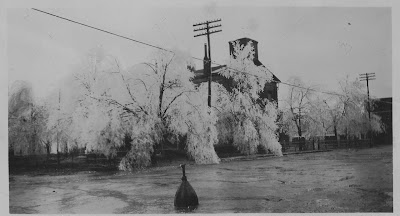 A picture of Main Street and the ice covered and broken trees around the old Court House.

Some information about this ice storm from the Jan. 15, 1937 Crittenden Press.


A half inch coating of ice which covered utility wires and trees in Marion and Crittenden County Saturday night did an underestimated amount of damage.


Dozen of electric wires went down from midnight Saturday until Sunday afternoon, hundreds of telephone poles fell or were broken off.  Street were littered with tree limbs which had snaped under the weight of the ice and yards represented a shambles with highe trees ruined.  All limbs were stripped from some trees, leaving only the stump while other split down the center an dleft nothing.


Old residents term it the worst ice bark they ever saw.  Telephone lines on the Sturgis, Princeton and Salem highways were matte and those not broken were sagged several feet.   Of the twenty-eight farm lines going out of Marion only one was left Sunday, that was to Chapel Hill, nearby.


The worse damage as far as Marion people are directly concerned was the damage done shade trees.  Trees that have been watched and guarded incessantly for five, then, twenty-five and even fifty years were wrecked beyond salvation.  Practically every yard in Marion represented a brush pile. (I thought an unusual statement, as broken and destroyed trees aren't what they worry about now, but Marion at this time, must have been concerned about their shade trees.)
Posted by Forgotten Passages at 5:28 AM