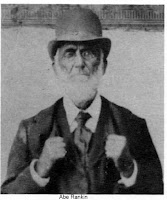 Abe began working on the Ohio River when a young man, loading flatboats and piloting them down the Ohio and Mississippi to New Orleans.

On one such trip he traded his boat for the tract of land between Ford's Ferry and Weston, from which the Damn 50 Reservation site was sold.  He brought his family here about 1858 and he continued to run the flatboats down the river.

He conceived the idea of planting 1,000 winter apple trees and when their fruit was harvested he planned on loading them on his flatboat and taking them to New Orleans.  When the trees came into bearing they turned out to be summer apples and there was not much could be done with them, it seemed they overdid themselves in their production.

A cider mill was set-up under the trees and barrels of cider were taken south by flatboat.  People came from all around and made what cider they wanted and left without ever going to the house, it turned into a community orchard.

Uncle Abe, tho never much of a farmer, had a yen for "bidding in" any tract of land that was sold at the Court house door, if it joined his tract.  At his death, he owned twelve or fifteen hundred acres, extending from the river for many miles around, including Ford's Ferry island. Mr. Rankin died May 23, 1898 and is buried at Mt. Zion Cemetery.

(Story was shared with The Crittenden Press, Nov. 1955, by Sadie Rankin Terry.
Posted by Forgotten Passages at 8:58 AM

He is my grandmother's grandfather (I think).
Roy Brewer
violinroy@yahoo.com