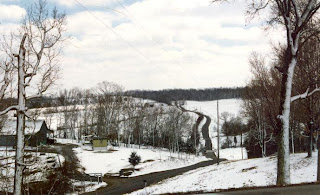 An Ancient Road.
One of the oldest roads in Western Kentucky, and the oldest in Crittenden County, is the Flynn's Ferry Road (now Piney Fork School Road and Copperas Spring Road). It used to be just the one name from here to Princeton.
The picture at the right was made several years ago standing on the bank of the Piney Fork Church grounds. The melted snow on the road in the distance made it look as it might have many years ago as it wound it's way through the county side. The barn on the left at one time was the Piney Fork school house. The owners build sheds on each side of it to store hay.
Geologically a natural break formed by parts of Camp Creek and Piney Creek in the eastern part of the county in very early time formed a basis for a North-South trace or trail from the Tennessee country into Southern Illinois.
Wild animals, that were plentiful at the time, first made this trace from the hills of Tennessee across the area of Kentucky to the Salt Licks in Southern Illinois. Later the Indians coming to this area to hunt for meat to feed their families followed this cleared trace through the wilderness that was created by the buffalo and deer herds.
This trail, after being developed by the Indians and early settlers, formed an almost straight line from Princeton to the town of Weston on the Ohio River. It was here at Weston that the animals, as well as Indians, would cross the then shallow Ohio River to get to the other shore.
When early settlers located at Weston, this road was known as the Chicakasaw Trail, for the Indians that had helped create this trail. Soon after George Flynn came to this river crossing and established a ferry and then the road was known as Flynn's Ferry Road. Flynn's Ferry Road ran from the town of Weston to the home of William Prince, who lived at the Big Spring which later became the site of Princeton.
Flynn's Ferry Road has been a part of this area since 1803. Sometime within the past 10-15 years, without thinking of the historical significance of this road being named Flynn's Ferry Road, the name was changed to Copperas Spring Road. Many of us would like to see this action reversed and the road once again having it's historical name of "Flynn's Ferry Road."
Posted by Forgotten Passages at 9:16 AM